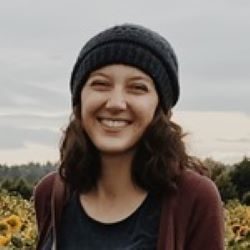 Carys grew up on up on a hospital ship in West Africa until she was 18. After graduating the Mercy Ships Academy she moved to Spokane WA to attend Whitworth University where she studied Theology and Psychology. She spent her first year out of college volunteering as a Chaplain back on the ship during it’s ten month stay in the nation of Cameroon. During this time her main focus was creating and running a youth group for the kids aboard. Carys now lives here in Normandy Park, she is a full times Mdiv student at Fuller Seminary and the Middle School Youth Group Coordinator for John Knox.

Carys loves video-editing, biblical history, putting WAY too much whipped cream in her coffee and hanging out with her objectively cutest dog in the world Bernie. She’s in her office Tuesday and Wednesday afternoons so feel free to stop by!